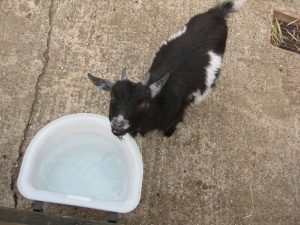 We have had various animals here at Hornimans over the decades including a three legged sheep. We know that it’s an important part of urban life, for our children to have the opportunity of being around animals and help take care of them.

We now have three Pygmy goats, Freddy (The Silver Fox), Barry White (he literally sings – well, he’s very loud) and his twin Brother Harry.  They have a pen area where they live when the children are on site, but when we have all gone home they are free to run on the whole of the adventure playground.  You can come and pet them, help clean and groom them on Saturdays.  Just pop in and ask the playworkers.

Information about the average Pygmy Goat:

Pygmy goats originated in the Cameroon Valley of West Africa. They were imported into the United States from European zoos in the 1950s for use in zoos as well as research animals. They were eventually acquired by private breeders and quickly gained popularity as pets and exhibition animals due to their good-natured personalities, friendliness and hardy constitution. Today you can find them as house pets and at petting zoos.